Well, it looks the book I use for media preparation was right! Seriously guys the “Handbook of Microbiological Media” by Ronald M. Atlas is a MUST have reference for anyone who’s making up any kind of medium, and especially for home yeast ranchers since it includes recipes that can be made from your every day around the house materials. One such recipe is the Potato Dextrose Agar which goes something like:

Use: For the cultivation and maintenance of numerous fungi such as Cephaleuros virescens.

I modified the recipe a bit by adding sucrose (table sugar) instead of glucose to allow for Lactobacillus differentiation. Lacto grows as small colonies on other media, but sucrose allows it to form large colonies due to some complex formation that I don’t remember off the top of my head. So the plan is to seed a mixed culture such as that Berliner I’m currently playing with, or a culture from grain, or Cascade dregs (their Lacto strain is a damn monster based on how sour the beers come out) on Malt or something else, pick out small colonies and streak on PS plates. Unless my books are wrong, Lacto colonies will get big. Another route would be transfer the entire plate onto a filter/membrane/paper, transfer onto a PS plate and compare the growth.

I also read that this medium is very good for mold growing and boy were they right! Mold contamination is not that uncommon, but it takes a while for it to grow out to be a problem. By then you’ve grown whatever you need and you don’t care about the mold. It appears that this is indeed an ideal mold growing medium. I have never seen such rapid growth. Never! It’s just so cool that I’m not even mad about the plate being all but useless now.

Also it looks like the other plates from that batch turned out fine. The agar is nice and firm so it must have been the uneven mixing or something else… don’t see how though, because I made sure I mixed it well to avoid this problem. Hmmm… Regardless, the experiment goes on!

Here is a photo of the really moldy plate. Appreciate the beauty of the mold! Seriously, I find mold to be just fascinating. I even looked into getting a Mycology degree, but there aren’t any in NYC so I ended up in Molecular Bio instead and I don’t regret it. 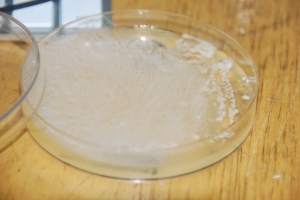 Appreciate the mold! As you can see, the colonies also grew out nicely but got overgrown.

That much mold in 48 hours is just amazing. It's also amazing that a 7 month old culture grew so quickly.