The issue of dry yeast rehydration has been following me around since about the time I first wrote about it. A conversation here and there sparked up, often resulting in lengthy discussions on the topic of water vs wort and temperatures. Some took my suggestions and ideas readily, backed up with some info from a scientist who worked on these, while others were more skeptical. In either case it seems that people who tried rehydration in warm water preferred it to sprinkling straight into wort. The hardest issue for people to understand seems to be the matter of yeast viability. I find it very hard to explain that making a starter with dry yeast is pointless because osmotic pressure would kill a large portion of the initial culture and the time would be simply spent on rebuilding it to its original numbers. It doesn’t seem like it’s a very difficult concept to grasp, but the issue persists. Rather than debating and trying to back it up with simple scientific logic, I decided to conduct a little study to address the questions of temperature as well as sugar and hop compound concentration in dry yeast rehydration.

The original study was supposed to just be a temperature series in water, but right when I was about to start, it occurred to me that repeating the same series with different worts would also be interesting. The experiment consisted of three series:

The idea was to test the concept of temperature and osmotic pressure as well as assess the effects of high hop compound concentration on ensuing yeast viability after rehydration. For that purpose I used a packet of Danstar Nottingham that’s been sitting in my fridge for a while. It’s safe to assume that the viability of that culture is not at its optimum, but it’s what I had on hand and its response should be comparable to that of a fresh pack.

Experimental design was simple and straightforward: 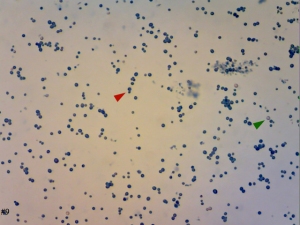 An example of a sample with such low viability that counting was useless. Red arrow = dead cell. Green arrow = live cell.

The results were not completely unexpected. As expected, cell viability was much higher in yeast rehydrated in water rather than in wort. As the temperature decreased so did the viability, though more rapidly than I would have expected. This could be attributed to the age of the packet, but getting 85% viability in water suggests that they are still pretty healthy. What’s interesting is that starter wort largely imitates the water curve, but with significantly lower live cell counts, but high OG/IBU wort does not. It seems that in those conditions yeast get killed very quickly in warmer temperatures and they survive better in slightly cooler conditions. At around 17C (63F), which is a normal pitching temperature for most beers, the starter and high OG/IBU wort intersect and are almost the same as the temperature decreases. This suggests that when it comes to sprinkling dry yeast straight into wort it makes no difference if it’s a small or a big beer. Osmotic pressure will kill them just the same.

I suppose the viability curves would be a bit higher if the pack was fresher and they vary a little from batch to batch, so I constructed a theoretical viability curve chart based on these findings, but with an increase of 10-15% so as to not surpass  100% viability and decrease the sudden drop below 30C. 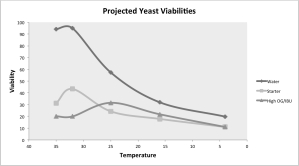 I hope this little study has been helpful to you since some of you have been asking me to do a temperature series for a few months now. I also hope that this cleared up some doubts and concerns that you had regarding yeast rehydration.

22 thoughts on “More on Yeast Rehydration”