My fellow yeast mates!
The time has come to send you Cantillon Iris (2007) Brettanomyces C2 isolate.
Let me give you a brief description of this strain based on my own impressions and the feedback I got from around a dozen people who got back to me.

My impressions for C2:
Finished at 1.001. As I opened the carboy, the smell of wild strawberries erupted and filled up quite a radius around it. Very delicate and pleasant. As the beer was agitated by racking into the bottling bucket, strawberries were replaced by the signature bittersweet herbal-woody funk that all of the Iris isolates have. After allowing the gravity sample to stand and breathe for a while, the funk was replaced by fruit and pineapple. Given more time to stand, the strawberries came back. The gravity sample was dry, lightly tart with the signature Iris isolate funk. After allowing it to stand, strawberries, pineapple, apricot and mango came into the flavor as the funk recedes. The beer is lightly hazy and much more transparent than C1 portion was at the time of bottling. Hop bitterness is also not as pronounced as it was in C1 portion. Official tasting will be done in a couple months because I want to taste all 3 strains side by side.

Impressions from other people:
It was described as strawberries, bubblegum, green apple, pear, apricot, peach, wet sock/good cheese and slight vinegar. Strawberry, peach, apricot and pineapple were the most common descriptions. Finishes dry. Seems to be a good strain to use with fruity hops. Check out Kyler’s post about a beer he made with C2/C3 mix and Meridian Hops (http://haydtsbrewing.com/2013/02/13/100-brettanomyces-beer/)

I don’t know exactly how many vials are available because I haven’t aliquoted the stock yet, but feel free to email me asking for it and I’ll try my best to accommodate as many people as I can. If you get a vial and plan to use it as the primary strain, make sure you pitch at least twice the amount of yeast that you would with normal brewer’s yeast.

ALL GONE! THANKS FOR PARTICIPATING!

Email me at bkyeast@gmail.com if you’re interested in acquiring a vial. As before, it’s $10 for the shipping and all that other good stuff. If you have some cool and unique strains of yeast or some cool beers, feel free to let me know and we could work out a trade.

Message for brewers in NYC or very close to it, i.e. Anthony, Simon, William, Aaron, Derek etc. Email me too and let’s arrange a meetup where we could taste some homebrew and swap yeast.

Part One of the Dry Yeast Series: Introduction

My latest post about dry yeast rehydration raised a rather unexpected wave of interest with surprising number of links from various websites and forums I didn’t even know existed. In about a week it became the most viewed post after Selective Medium. One of the readers (Luke) raised an interesting point regarding temperature difference between the yeast and the wort they’re pitched into. While I haven’t come across any studies of effects of this on flavor profiles, I found some whispers that pitching “hot” yeast into cool wort causes portion of the population to die. So I decided to do another mini study with dry yeast and whether or not this is true.

The experiments were designed as follows:

– Danstar Nottingham dry yeast were rehydrated in water at 32˚C (90˚F) for 20 minutes. Viability was assessed with Trypan Blue for all samples in the study.

– Samples of the resulting culture were placed into wort at various temperatures at dilution of 1:11 (0.1mL yeast into 1mL of wort) and incubated at those temperatures for 20 minutes, followed by viability assessment. Results summarized in Figure 1.

– After samples were taken, the culture was placed at 4˚C (39˚F) to passively cool until yeast began precipitating and culture started clearing up at the top (approx. 40 minutes).

– Viability of the resulting slow cooled culture was assessed, samples of it were placed into worts at various temperatures and treated as described above to observe the effects on yeast in a scenario of a washed yeast cake (since that’s done with water and stored in water) pitched straight into beer right out of the fridge. Results summarized in Figure 2. 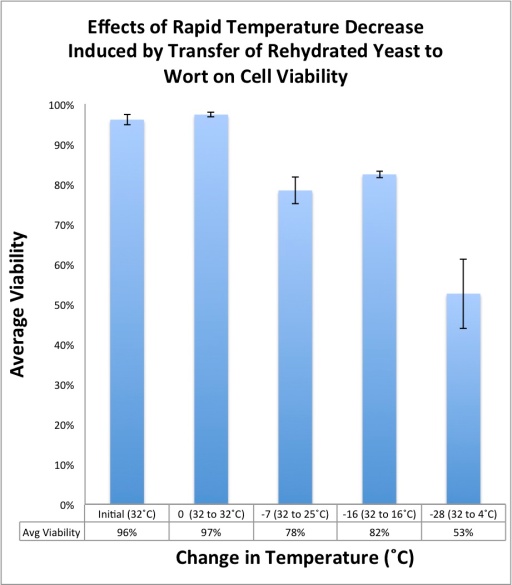 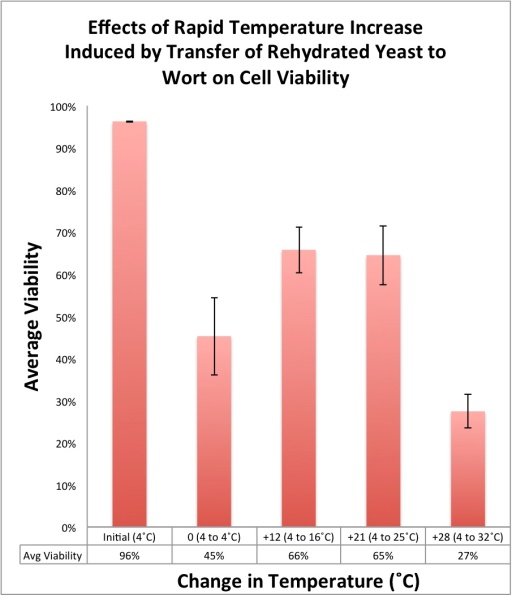 Overall, both series largely imitate each other with major difference in initial isothermal transfer.

It looks like dry yeast really dislike the cold. In the previous post I showed that cold rehydration both in water and wort is detrimental to yeast health and this appears to support that notion. Transition from water to wort seems to be more detrimental in the cold rather than warm conditions. Percentage of cell death appears to decrease as the receiving wort gets warmer, ending with full viability potential at 32˚C (90˚F). As seen from gradual cooling of the yeast from initial rehydration temperature all the way down to 4˚C (39˚F), which retains full measure of viability, gradual cooling is a lot less detrimental than rapid. Can you pitch “hot” rehydrated yeast into your low-60s wort? Sure! Even with the loss of ~20% of cells, you’ll still probably have enough yeast there to ferment an average brew just fine. However, these data suggest that gradual cooling prior to pitching would be better. So if you’re willing to take that extra step of enjoying a pint or cleaning your gear as you let the yeast cool before pitching, I say “do it!” I think there are two factors playing here: 1 – temperature difference, and 2 – water to wort transition. Which is more important? Can’t say. Most likely it’s a combination of both. On one hand, we see that viability doesn’t change at all when you transfer from water to wort at the high end of the temperature series, but then when the same is done at the lowest end the effects are profound. Mid-range temperature difference is not all that horrifying, while large difference has profound effect in both cases. Perhaps the yeast dislike cold wort density and its dynamics. I don’t think it’s the weak cell walls because by that time they’ve had ample time to rebuild and utilize resources they have from dry preservation. Probably just general change of environment shock exacerbated by sudden low or high temperature that’s responsible for these results.

Effects of gradual cooling as well as equilibration with wort prior to pitching will be studied in the next part of the dry yeast series. Stay tuned.

– I originally planned to do the graduate cooling and equilibration study together with this, but as my time is limited and I just found out I have to present my research progress in 4 days due to sudden schedule change, I decided to put up these results now and finish the second part later.

– If anyone is interested in repeating these experiments in their home labs and validating or disputing my findings, please do. That way we can discuss our data and come up with more serious and credible results that would benefit the brewing community.